So, in my last blog, I revealed that I'm moving away from electro-acoustic music, and I'm quite happy about the decision.  What, then comes next?
I do need to preface the next part of this monologue:  I actually like a lot of electro-acoustic music. I'm still enamored by lots of Manoury's music, and find that Répons (Boulez) is one of the most intriguing pieces of the later 20th century.  I've just lost patience with my own production efforts.

Charles Baker mentioned that Paul Lansky is also taking a similar route, moving towards acoustic works.  And, it has been noted that the late Gérard Grisey had done that quite some time ago. Actually, a lot of composers have done so!  But, all of them have take different routes, depending on their relationship to the medium.

There are a lot of composers who wrote a few electronic pieces and then returned to their other work. Jacob Druckman and Ron Perera certainly fall into this category.  For them, having created a significant contribution to the field (Druckman's Animus series of works, and Perera's textbook) seemed to, for the most part, quench their thirst for electronic timbres.  The bulk of their work since then has been largely unaffected by their work in the studio.  [Druckman's Valentine, which is a masterful of timbres and effects for solo bass, was written during the same time as the Animus pieces, exhibit an influence of electronic music, but the same cannot be said of the works of the 1970s.]

Then there is the case of Charles Wuorinen, who has produced two significant electronic works during his prolific career  (Time's Encomium and the tape part to Bamboula Squared).  In both works Charles viewed these as extensions of his own compositional practices rather than forays into new timbral horizons, although both pieces make use of some fantastic antiphonal effects.  The tape part for Bamboula Squared is now in a 4-track version (I actually re-synthesized it in csound).

I don't see myself as going on either of these routes.  What has always attracted me to electronic music was the new timbres, the spatial aspect, the bending of acoustical principles. Grisey (and others) discovered how to accomplish all of that without electronics. Listen to his Partiels, and you'll know what I'm talking about.  There are long passages where the timbres are comprised of multiple extended instruments, and you'll swear that there is a tape part for the work.  Okay, he 'cheats' by using an accordion (which has such an unusual color) and a Hammond organ, but still...

So, the big question: where to go next?  Incorporate or reject?

Posted by Anthony Cornicello at 11:00 PM No comments: 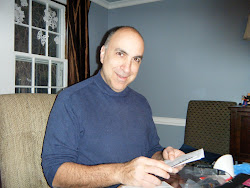